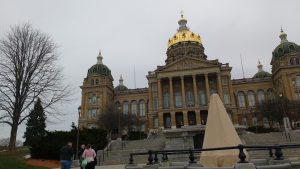 Republicans who run the Iowa House have given Iowans the weekend to consider a $1.3 billion package of tax cuts they unveiled this week. This is what passes for public input in a Statehouse where the GOP always seems to be in a hurry to approve major legislation.

It’s a weekend when more than a few Iowans will be scrambling to pay their federal and probably state taxes. We doubt that’s a coincidence. On average, under the bill, Iowans will get an 8.9 percent income tax cut.

Otherwise, the timing of these tax cuts couldn’t be worse.

Lawmakers and Gov. Kim Reynolds just polished off yet another round of midyear budget cuts spawned by sluggish state revenue collections. The cuts hit universities, community colleges, human services and the court system. Republicans have borrowed $144 million from reserve funds to patch budget holes, and are unable to pay the money back.

Iowa’s farm economy, already challenged, now faces the prospect of a trade war with China, which could slap devastating tariffs on vital soybean and pork exports. The effect on state tax collections is sure to be anything but positive.

The pretense of tax “reform,” or making Iowa’s system less complicated, has fallen away.

The House bill keeps federal deductibility, allowing Iowans to deduct federal tax payments from their state liability. It’s a mechanism that tightly ties Iowa’s tax structure to the erratic whims of Congress and makes our income tax rates look artificially high. Many Iowans, including a number of Republicans, say the provision should be scrapped.
The House plan also fails to seriously dent the mountain of tax credits, exemptions and giveaways sapping state revenues to the tune of billions.

A tax plan floated by Reynolds smartly included “triggers” that would halt the pace of tax reductions if state revenues stalled or fell. The House GOP plan contains no triggers, meaning the full $298 million annual price tag will be paid regardless of fiscal realities, and in a state already underfunding education, water quality and other priorities.

The bill raises sales taxes by $106 million, taxing digital streaming services such as Netflix and ride-sharing services such as Uber. And yet, Republicans still refuse to enact the sales tax increase Iowans say they want, a three-eighths-cent boost to fill the Natural Resources and Outdoor Recreation Trust fund approved by voters in 2010.

So you’ve got the weekend, Iowans. We suggest you find a GOP state representative and let them know a state that can’t repay its borrowing, can’t cover the cost of its top priorities and that’s facing economic trouble ahead has no business cutting taxes by $1.2 billion. But you’d better hurry.